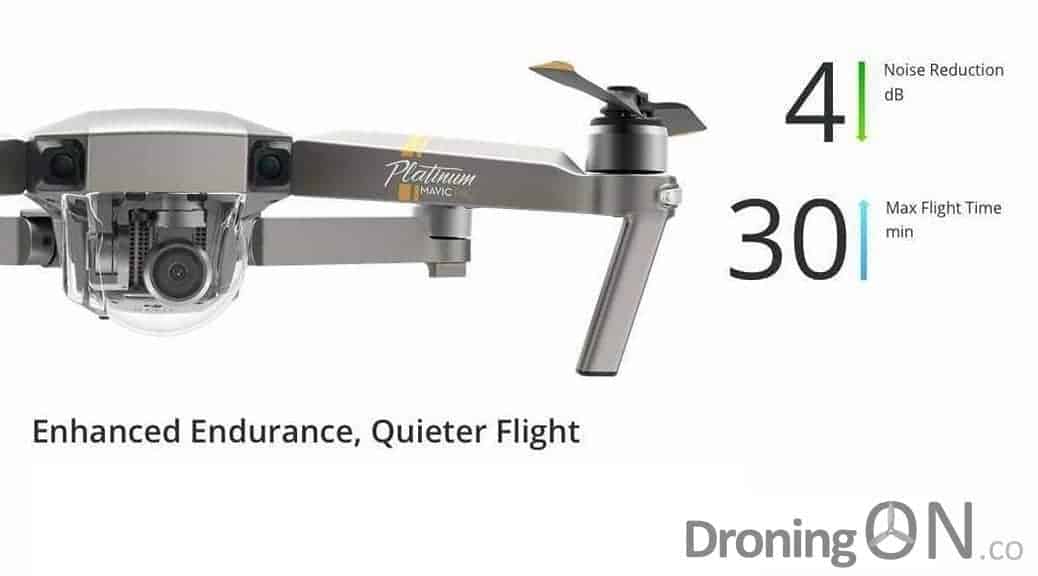 [UPDATED 31-08-17] DroningON has official DJI photos confirming the launch of this new model, as well as confirmation from industry insiders. this model will be launched by DJI with extended and quieter flight time.

Is the Mavic Pro Platinum real?

Yes we believe so and we have been correct in our past DJI announcement predictions (Mavic, Spark, Inspire 2). We have new photography to showcase the look, features and style of the revised Mavic Pro Platinum model. 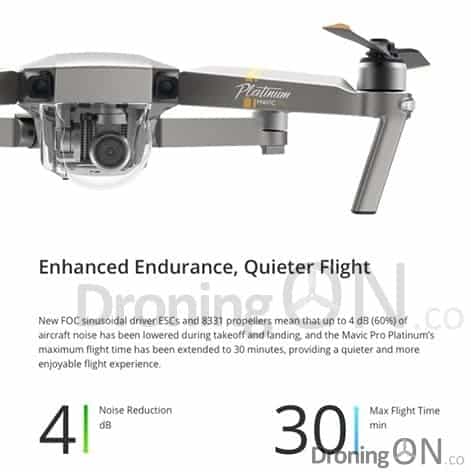 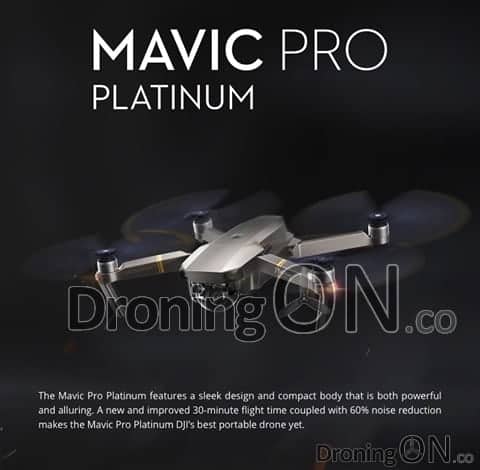 The new model is not massively different from the baseline Mavic Pro specification, although it has the following technical/aesthetic improvements:

Earlier this year, the popular DJI Mavic Discussion Group conducted an extensive consumer Mavic Pro 2 poll. Extended flight time polled at number 3 of all desired features and so it is positive to see that DJI have acted upon consumer demand.

[perfectpullquote align=”full” cite=”” link=”” color=”” class=”” size=””]Keep a close eye on this link (http://bit.do/MavicProPlatinum) which will take you directly to the Mavic Platinum Product Page as soon as it launches.[/perfectpullquote]

The increased cost of this new Mavic Pro model may not appeal to users on the basis of a mere 3-4 minute flight time gain, especially when $100 can buy an additional battery providing 27 minutes flight time.

Note the “Platinum” text designed with a font far away from the regular DJI style, the model desigation is also strange as the logical naming would have been ‘Mavic Platinum’, not ‘Mavic Pro Platinum’. The gimbal also looks a little chunkier although this might just be due to the aspect of the photo.

The props are also a revised design to the original Mavic props with a more aggressive shape and now featuring yellow tips, the revised shape potentially contributes to the quieter flight experience and extended flight time.

With the IFA Event in Berlin commencing this Thursday and invites already distributed for a DJI announcement, it looks likely that two new DJI models will launch, the ‘Mavic Pro Platinum‘ and the ‘Phantom 4 Professional Black Edition‘.

Were the previous leaked photos fake?

The two photos leaked led many DJI consumers to suspect that they were a ‘Photoshop effort’ and we agree that they may not be entirely legitimate, these photos may have been a mock-up for marketing/photography purposes.

The two leaked photos have no credited source but appear to show a DJI Mavic Pro and the packaging being photographed for press and/or media, but the drone and box have a few quirks/errors.

But take a look at the above photo which compares a standard DJI Mavic Pro retail box with the packaging pictured in the ‘leaked’ photo. you will note that when the box is sat on its base (carry handle facing upwards), the graphic is upside down.

The second photo shows the Mavic Pro Platinum sat on a table and the only difference here is the ‘Platinum’ text written on the left-hand arm of the drone.

Watch this space and be sure to subscribe to this website for updates, we will be covering the IFA Berlin event very closely.

COMMENT below with your thoughts regarding this new model and bookmark this URL: http://bit.do/MavicProPlatinum