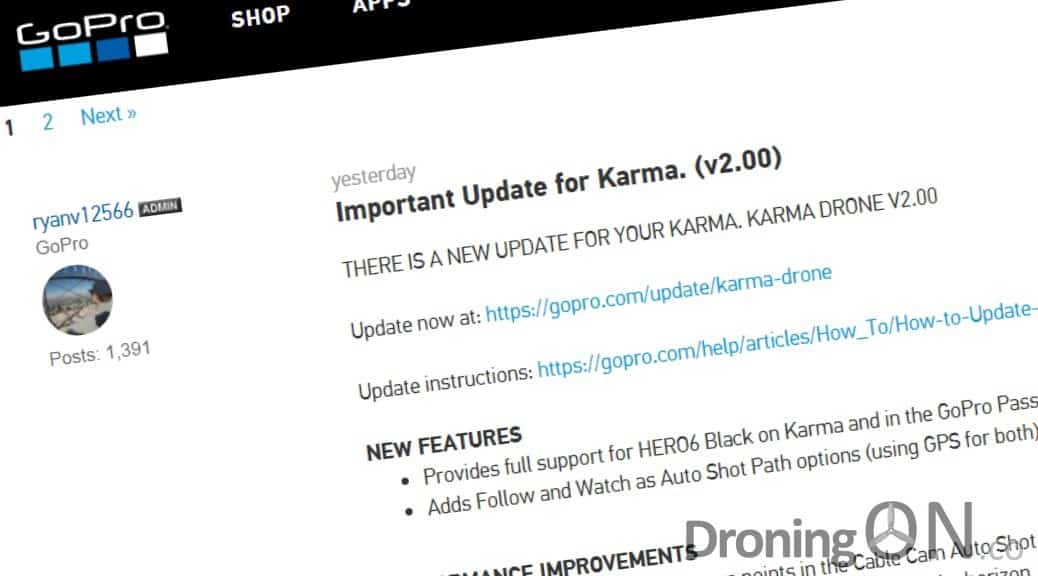 When GoPro Karma was launched in 2016, we were amongst the first to criticise the lack of functionality and features. Now GoPro have boosted the Karma software specification through the released of the latest v2.0 firmware.

In order for a new drone to compete successfully in the currently crowded industry, it is no longer just about the hardware. Software must be flexible, feature-rich and incorporate at least the basic set of baseline features expected from a modern drone.

With the new v2.0 firmware release, GoPro has finally introduced “Follow” which allows the Karma to track your movements via GPS and to fly accordingly whilst keeping the subject in frame.

GoPro uploaded a demonstration video to their YouTube channel, show-casing the new features of the firmware. Despite ‘Follow’ being a long-desired missing feature of Karma, the 2 minute video spends just 14 seconds talking about it, with only 4 seconds of example video (the video below will automatically skip to the relevant point).

The Karma ‘Follow’ tracking will not be perfect, owners will be disappointed that this new mode does not incorporate any form of vision or optical-assisted tracking, despite the high-resolution capabilities of the Hero cameras used by Karma. The result is that Karma will not smoothly track nor keep the subject in the center of frame.

Due to the GPS method of tracking, the subject must also carry the Karma controller, which is clearly not practical for water/action sports, to whom the Karma is targeted. The lack of optical tracking may prevent it from competing directly with the DJI Mavic.

A second new GPS-driven mode has been introduced called “Watch”. In this mode the Karma remains static in hover whilst autonomously yawing and rotating to ‘watch’ the subject holding the controller as they move, essentially like a camera on a tripod.

The ability to up-tilt the gimbal beyond the horizen is a nice touch, it allows for very creative shots which are not usually associated with drone photography.

In addition, the firmware adds support for the new and impressive GoPro Hero6 camera which introduces capability for 4K @ 60fps.

This will be a big boost for the GoPro Karma, giving it one of the highest quality video capture rates of drones within its class.

Users in the GoPro Karma Facebook Group are updating to the latest firmware now and will no doubt be excited to test the new functionality, we will update this article with any related news.