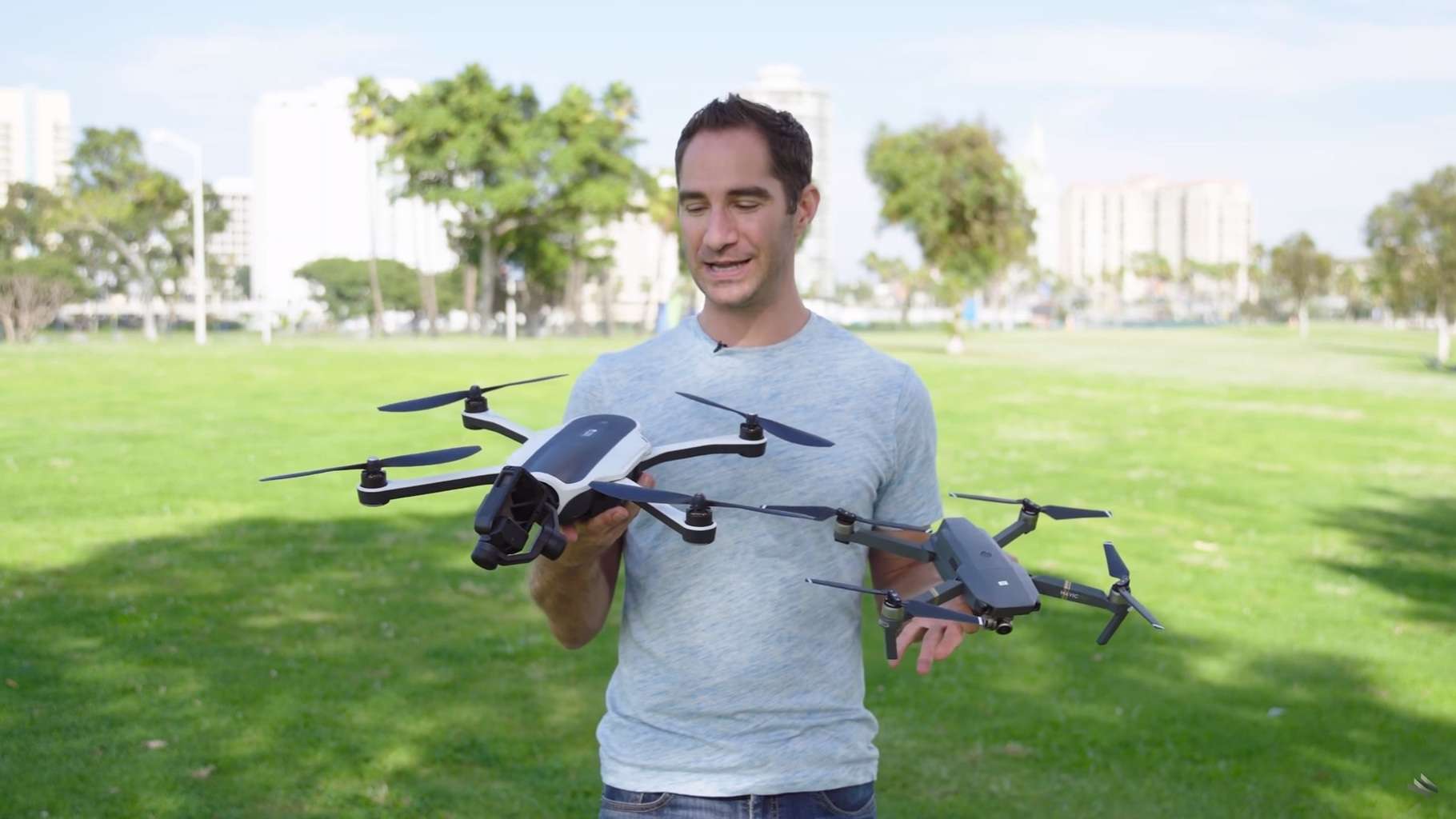 [Updated 05-11-16] Commercial tech-magazine reporting of drone technology would appear to be worsening with questionable bias, technical inaccuracies and misleading comments. Are these publications no longer motivated by morals and instead by financial greed?

Back in August this year, WIRED magazine compared the Staaker, DJI Phantom 4 and Hexo drones, rewarding Staaker with a generous 9/10, a drone which at that time had not even moved from prototype into production and is yet to produce any impressive tracking footage.

They gave the leading drone product of the year, the Phantom 4, a meagre 6/10 and that is where WIRED started to lose all credibility in the drone industry.

In their most recent example of poor drone-related reporting, Brent Rose from WIRED compares the DJI Mavic Pro with GoPro Karma, badly.

The review in video form is broken down into several segments.

From the outset Brent misses key aspects of the Mavic Pro’s specification. During a ‘speed race’, the Mavic Pro wins as expected by approximately 5mph in comparison with the Karma, but Brent closes the section with a comment that the slower speed of the Karma is an advantage, forgetting that Mavic has three flight speed modes including ‘Tripod Mode’ for capturing that perfect smooth shot, compared to the single flight mode of the Karma.

The Karma may be slower but it lacks any flexibility in controlling the speed whilst the Mavic Pro provides options to suit most scenarios.

Next he considers the FOV (Field Of View) of each drone and suggests that the wider 165 degrees of the Karma is better than the 79 degrees of the Mavic Pro, stating that you “get so much more of the landscape in a single shot”.

The reviewer clearly has no concept of FOV or the lens distortion introduced with such a radical FOV. The Mavic Pro camera is non-distorted and gives a far truer representation of reality. To obtain a fuller shot of the landscape with a smaller FOV, you simply fly a little bit further away from it.

No serious aerial photographer or videographer would ever claim that a FOV are large as 165 is an advantage when shooting footage or photos due to extensive fisheye effect and distortion which can be corrected in post but that alone can introduce image-degradation.

Worse still, Brent then claims that the Karma provides better, sharper and more dynamic picture quality, ignoring that the Mavic Pro offers not only an ‘Auto’ mode but also a full range of professional-grade settings available to the end-user to refine. To compare two cameras without first setting them to the same configuration is simply careless.

When the Mavic Pro was first released, a number of reviewers were unaware of the new ‘Touch To Focus’ feature introduced by DJI, consequently footage produced during these early reviews appeared to be blurry. Despite many articles produce since which clarify this feature, Brent appears to be entirely unaware as he comments that the footage produced from the Mavic Pro appears to be “soft”.

His comments concerning the Mavic camera are nothing but comical and highly inaccurate, to claim that the image quality is “disappointing” raises suspicions by some that this review has been funded by one of the drone manufacturers in this review.

Brent comments that the Mavic Pro transmitter needs to be paired with a smart-device which is simply incorrect.

The Mavic Pro controller has the benefit of being able to connect to your smart-phone or to be used standalone. In addition, you do not even need the transmitter at all as Mavic Pro also allows you to control the drone with your smart-phone alone, therefore providing flexibility and options for the consumer.

There is no doubt that the built in screen of the Karma is nice and that the clam-shell design is impressive, as is the ‘buddy screen sharing’ but the overall concept is limited as you cannot fly with anything but the Karma transmitter, close the lid whilst flying and Karma will not continue its shots (such as cable cam mode), it just stops and hovers.

Next Brent illustrates each of the flight modes, correctly stating that Mavic Pro features a tracking feature whilst Karma does not but stating that ‘Active Track’ is “buggy”. He forgets to add that the Mavic also features the traditional GPS follow which can be more reliable although this mode does lack the automated subject-framing of ‘Active Track’.

He demonstrates the ‘Orbit Mode’ of the Karma but then oddly states that the “Mavic Pro can do this one too, but just not automatically” which is incorrect. DJI have for many years incorporated the ‘Point Of Interest’ feature into their app, it is also present on the Mavic Pro.

In his closing statements, talking about the Karma he states “its pretty compact and really really easy to use” but he then states “a lot bigger and heavier”, is that not an oxymoron?

But the ultimate fail is where Brent states that the “Mavic Pro image quality compared to the Karma really sucks“, such a statement is just plainly inaccurate and incorrect.

The video review then shows a comparison photo for the two drones whereby the sun is present in one and not the other, clearly the end-result will differ radically as the sensor will attempt to compensate, any comparison is simply not viable.

He concludes that he would choose the GoPro Karma, shortly after this he performs a ‘Tug Of Drone’ competition with both drones tied together via a length of ribbon.

The Karma appears to win with ease although it is questionable as to whether the Mavic Pro is even being flown in the opposite direction, or even whether it is set to ‘Sports’ mode, no throttle appears to have been applied. Once again this seems like an impossibility considering that the Mavic Pro is the more powerful drone, although Karma is slightly heavier but most would have expected such a test to result in a fairly level or balanced outcome.

How well was the comparison received?

Overall, this unpopular review has an equal balance on YouTube in terms of ‘thumbs up’ and ‘thumbs down’ as well as numerous critical comments rejecting the content of the review as biased and fictional.

Brent was driven to respond to the comments and says as follows:

[perfectpullquote align=”full” cite=”” link=”” color=”” class=”” size=””]”Oooh, I haven’t woken up to this much hate mail in a while! What a treat. I’m going to do my best to address the most common comments I’ve seen so far.

1. I have been flying DJI drones for years. The other two drone ops we had on this shoot both exclusively use DJI. We know how to use these drones. Just because the video didn’t specifically mention that we were tapping to focus doesn’t mean we weren’t tapping to focus. We looked at the footage on a number of different screens and the Karma (well, the Hero5 Black, really) clearly won.

3. I didn’t experience the drift issues with Karma that some have mentioned here. If I had I would have mentioned it.”, Brent Rose, WIRED. [/perfectpullquote]

Many will still find even this response hard to believe. Have a read of our own comparison which includes these two drones as well as Lily, Staaker and Snap.

Brent Rose’s own Instagram profile has multiple photos of Karma from just over a week ago, but not a single shot of a Mavic which suggests that he has been given a Karma to keep.

Since the release of this initial ‘review’ and our article, WIRED have issued an update video to retract their comments.

The expectation may be for the viewers to forgive WIRED and Brent Rose for their inaccurate, incorrect and poor reporting but ultimately their update video is nothing but highly embarrassing and awkward.

It is an admission that they were wrong and it evidences that without us informed viewers; whom corrected the numerous errors and omissions in their initial review, that many would have assumed their review to be factual.

Here is the update video, let us have your thoughts after watching it by commenting below:

WIRED are not alone…

Just a few months ago, CNET ‘reviewed’ the prototype of the ‘Staaker‘ drone, and just as in many of the previous WIRED drone reviews, they barely skim the surface.

Staaker is sold as the “worlds best tracking drone” and yet the test at the end of this review which lasts all of 7 seconds does not illustrate any evidence of successful tracking.

How do we fix this?

Tech-magazine reporting has to improve, we in the drone industry are tired of consumers being manipulated and mislead by unprofessional articles and reviews claiming that almost every drone that they are sent (for free) is “the next best drone”, without any real or valid justification for making such statements.

Organisations such as WIRED and CNET need to employ drone professionals for reviews whom know what they are looking at and are aware of the history as well as competing products. Consumers need reality and honesty, particularly when parting with up to £1000/$1600 for many current consumer models.

DroningON will always be true to consumers, we evaluate, review and test drones honestly and sincerely. Never will we be ‘bought’ by any manufacturer and if a product that we test is not fit for market, we will be the first to report as such.

You can read the full WIRED review here and the video can be viewed below, be sure to leave your comments at the base of this article. Please be sure to SHARE this article.

UPDATE 11/04/2017: We have just noticed that Wired removed their original YouTube review shortly after we published this editorial.

Be sure to join the DroningON Discussion Group to express your views and thoughts concerning reviews such as these.