When travelling or on the move with your Mavic Pro, there is nothing worse than flat batteries. The DroneMax M10 from Energen might be an answer, capable of charging two DJI Mavic Pro batteries concurrently, 20% faster than any other method.


We were sent the DroneMax M10 for review and following a detailed inspection, we tested its capacity through a partially scientific test, charging two DJI Mavic Pro batteries concurrently.

The results were really positive, but the decision looms for most consumers as to whether they would prefer the DroneMax M10 above buying two DJI Mavic Pro batteries instead.

The benefit of this portable unit is that it does not just provide charging for two batteries but also for other USB powered products, including the transmitter, mobile phones and even drones such as the DJI Spark which can be charged via USB. 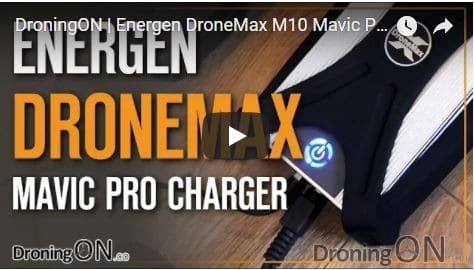 The Energen DroneMax M10 is available from retail outlets but is cheaper online via Amazon with the following links:

❍ Weighs twice as much as two Mavic Pro batteries.
❍ Takes around 4hrs to charge fully.
❍ Only sufficient capacity to charge 2 batteries.
❍ Expensive, despite being cheaper than batteries.

The full technical specification for this drone is as follows, based on their current published technical information: