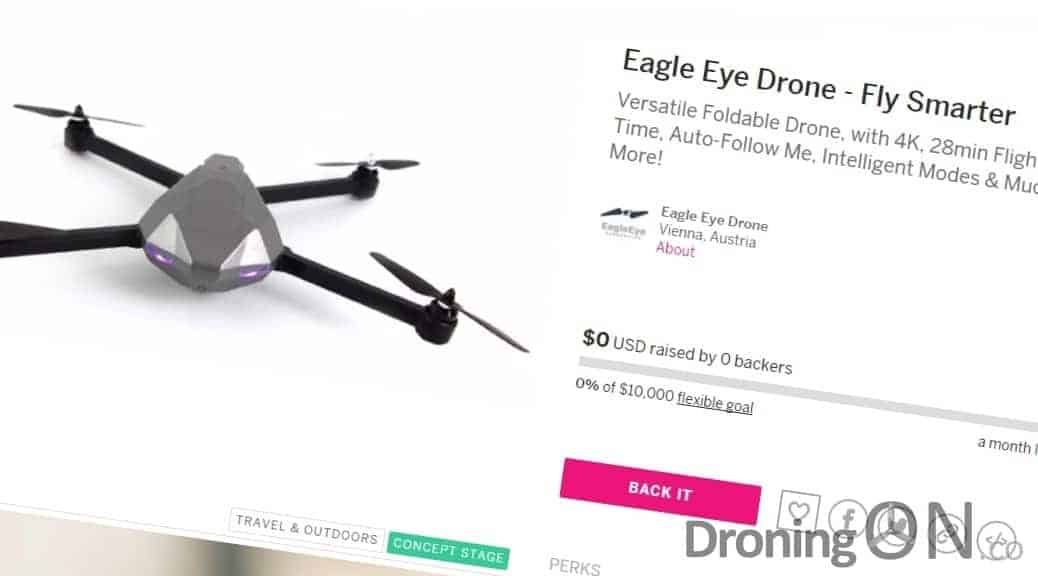 Recognise this crowd-funder project? Just a few months ago, we warned consumers to avoid the Gobe Drone project which had launched on IndieGoGo, fortunately the project failed to hit its funding target, but the scammers responsible for Gobe appear to have returned.

[UPDATE 06/09/17 – IndieGoGo have closed the project following our article and formal report with the following statement – “This campaign has been closed by Trust and Safety due to a violation of our Terms of Use. The campaign will no longer be accepting contributions, and the Campaign Owners no longer have access to the campaign.”]

A new project has just appeared on the IndieGoGo crowd-funding platform, once again the platform has proven that they have little regard for the backers that utilise their service by failing to verify projects before allowing them to go live.

The new project is an identical clone of the original Gobe Drone campaign, the drone is identical, even down to the shape of the ‘eyes’ on the front of the aircraft and the marketing images/materials used.

The only key difference between the two campaigns appears to be the location of the project creators, relocated from San Francisco to Vienna in Austria.

We have tried to find additional information regarding the company ‘Eagle Eye’ and their base in Austria, unsurprisingly we have found nothing.

There are too many warning signs concerning this drone, the specification, fake promotional video and the project surrounding it, the quoted flight time of 28 minutes alone is enough to air caution before investing your hard-earned money.

Even the campaign tag lines are the same when comparing the old project page to the new version:

[perfectpullquote align=”full” cite=”” link=”” color=”” class=”” size=””]”EagleEye Aerobotics started in 2016, and we’ve been on an epic ride ever since. From our beginnings as a young start-up company with a compact but solid international team…”[/perfectpullquote]

[perfectpullquote align=”full” cite=”” link=”” color=”” class=”” size=””]”Gobe Robotics started in 2015, and we’ve been on an epic ride ever since. From our beginnings as a young start-up company with a compact but solid international team…”[/perfectpullquote]

This all demonstrates that the new campaign is nothing more than a copy-and-paste effort from the same team, with the addition of a few more white-lies.

DroningON advise consumers to avoid this project at all costs and ask that you comment below with your thoughts. We also request that users report this project to IndieGoGo, citing this article and the ‘Gobe’ campaign page.

Gobe responded publicly to this article via our Facebook page, claiming that the new ‘Eagle Eye’ campaign is unrelated to theirs, we provided a response in reply to their allegation of “libelous statements”:

We contacted IndieGoGo to report this campaign, they responded a to DroningON a few hours later with the following placeholder text:

Thank you for sharing your concern with us. At this time, the campaign is under review to ensure that it adheres to our Terms of Use (http://www.indiegogo.com/about/terms). We will follow up with you if we have any further questions.”, IndieGoGo[/perfectpullquote]

This story will be updated as we receive additional information.

Be sure to join the DroningON Discussion Group for the latest crowd-funding drone news, reviews and exclusives.