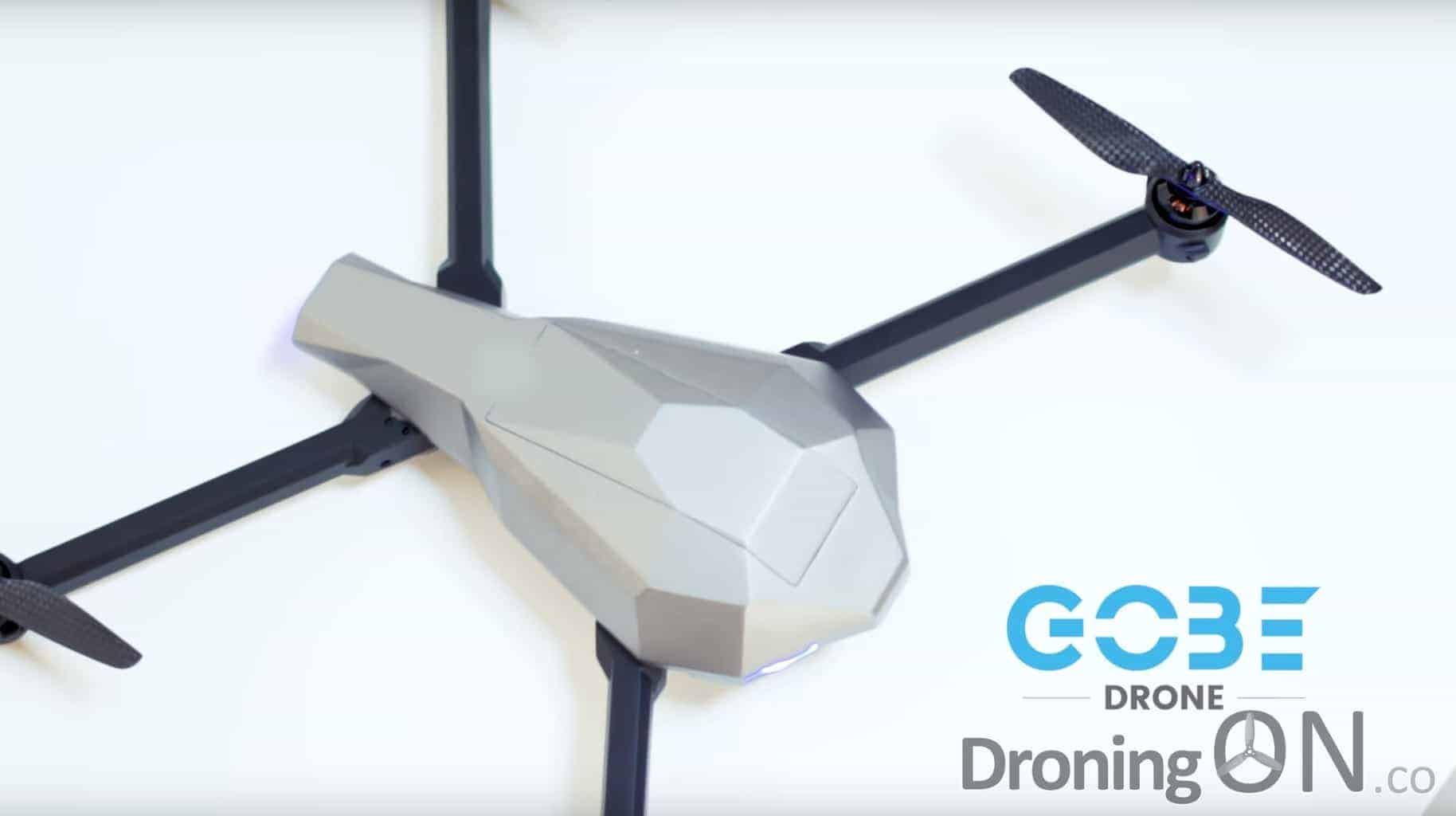 Launched today on IndieGoGo, yet another new budget crowd-funded drone project is live, but is Gobe truly capable of all that it promises and is it genuinely “ready for production”?

We have unfortunately seen it all too often, a crowd-funding drone project promising the world, suggested to be ready for production, said to have been successfully prototyped and proven, an impressive looking campaign project page but yet the campaign fails to ever deliver a working drone to it’s backers.

Who are Gobe Robotics…

Gobe is a new drone from a startup called ‘Gobe Robotics’, only limited information concerning their history is shown on the campaign page with no indication as to past successes or failures. No office addresses are disclosed, nor telephone numbers and consequently this company could quite easily disappear.

The six team members are shown on the campaign page but their personal history and experience is limited and brief. They claim to have partnered with a “factory which has been in business for almost two decades”, clearly this is an  irrelevant point.

[perfectpullquote align=”full” cite=”” link=”” color=”” class=”” size=””]Gobe Robotics started in 2015, and we’ve been on an epic ride ever since. From our beginnings as a young start-up company with a compact but solid international team, we’ve tried to stay true to our shared vision through a strong work ethic and adaptability, all in pursuit of a robotics company to bring high-end drones at an affordable price to the market. With the creation of the exciting new Gobe drone, and much more upcoming, we hope to show the world how a start-up can stand and compete with giants of the industry with bright ideas, motivation and hard work.[/perfectpullquote]

The above ‘vision’ exudes enthusiasm but there are some issues with this statement. Gobe Robotics were founded in 2015 and yet their Twitter account was established/created in June 2017, their domain name registered in December 2016.

There is no past history for this company online or even on their own website and so it is unclear what they have been doing for the past 2 years and how they have been funded.

Before committing your money to this ghost start-up, Gobe should be making very clear who they are, where they are based, including full office addresses, and to evidence their capability for being able to deliver on their promises.

It shows smooth footage which has quite obviously been captured with a camera attached to a mechanical gimbal, not via electronic stabilization. Gobe are yet to provide any demonstration of the drone from startup to landing, showcasing the promised features, intelligence and optimistic flight time of 28 minutes.

The various shots demonstrating tracking would also appear to have been ‘setup’ for promotional purposes, this falsely represents the product.

To assist potential backers with assessing whether this campaign is worthy of their investment, we will work through the specification to determine viability, it should however be noted that the specification on the Gobe website is oddly vague for a drone which, according to Gobe Robotics, is ready for production.

No information has been released concerning the chosen camera sensor or lens being fitted to the Gobe drone, therefore it is not possible to determine the quality of the footage. The mention of “4K” does not strictly mean that the drone will capture usable “professional” footage as promised by the marketing video. Quite often budget 4K sensors and IO provide only a limited frame-rate (15fps or less), and a reduced resolution once EIS is applied.

The “auto-stabilization” is referring to EIS (Electronic Image Stabilization) which is far less stable than footage from a camera attached to a mechanical gimbal option. The mechanical gimbal is stated as a ‘Stretch Goal’ but backers should be aware that the baseline drone being offered does not include the gimbal and that Gobe will not capture footage close to being showcased.

If Gobe utilizes EIS then the chosen resolution is generally cropped to pan, scan and scale the image to stabilize it.

Auto-follow modes generally only work efficiently when partnered with optical image analysis rather than just GPS position tracking alone, this allows the drone to keep the object being followed in center of the frame. GPS-only tracking rarely provides a truly satisfactory result.

Even the leading drone manufacturer, DJI, have struggled to fully develop their ‘ActiveTrack’ feature, therefore Gobe have a lot to prove.

Their promotional video shows a tracking shot of a teenager being tracked whilst on his skate-board, we do not believe this shot to have been captured via an autonomous mode because there would appear to be no change of direction from the drone during the shot, plus the proximity of the subject to the drone would make this object hard to track.

We cannot find any clear list of additional flight modes, which for a drone stated as ‘ready for production’ is quite odd. We suspect that the app and flight mode array are not yet completed.

Headless mode is said to be useful to beginners but really it is designed to capture shots on a moving plane, without having to be concerned about directional control.

If this works cleverly in conjunction with GPS (and not compass only) then it will be useful.

This is a simple feature and generally allows the drone to automatically launch from the ground and ascend to an inbuilt height, generally around 1.5m. The auto-landing provides the reverse by descending until the drone is aware that it is about to touch-down, at which stage the rotors are ceased.

No information is available for the sensing array fitted to Gobe, therefore we cannot determine whether it has ultrasound or optical sensors on the underside utilized to assist with altitude and landing/take-off stability.

DJI have evolved the intelligence behind the RTH (return to home) feature by intelligently avoiding obstacles when enroute back to the landing spot. It is unlikely that Gobe will be able to achieve this and will instead fly back to a stored ‘home’ location via direct-path.

Gobe is said to have ‘obstacle avoidance’, it remains to be seen whether Gobe will invoke avoidance during a return to home.

Weighing in at around 200g lighter than the DJI Mavic but with no details concerning motors or battery specification, it is impossible to comment on whether Gobe will be capable of such an impressive flight time, but stated flight times by crowd-fund drone projects are rarely accurate and are instead optimistic, embellished to generate backer investment only.

If drone-leaders DJI can only just squeeze 27 minutes out of the Mavic Pro, then it is highly unlikely that this new drone start-up can obtain 28 minutes from Gobe.

Drones have evolved significantly over the past few years and capability for GPS as well as GLONASS (the Russian GPS network) is now fairly standard, but Gobe has no mention of the latter.

The two GPS networks working in conjunction provides far more accurate positioning as well as redundancy to ensure safe flight but it would appear that Gobe is equipped with just the single network.

Gobe is equipped only with ultrasonic sensing which do not provide 3D obstacle avoidance (i.e. perception of obstacle depth/shape), and their range is fairly limited.

It is unlikely that the obstacle avoidance sensing of the Gobe drone will be efficient or effective.

There is no mention of the technology being used to facilitate this functionality, but Gobe may utilize the ‘Google Cardboard’ method whereby a phone is inserted into a headset with a split-screen, however this involves latency and would require a paired bluetooth controller or similar.

With no ‘transmitter’ option for Gobe, the the option of a HDMI output from such a unit may not be a possibility.

Facial recognition has been promised by past drone campaigns, such as OnagoFly, but did not succeed as it was ineffective. The DJI Spark has successfully implemented facial tracking but budget drones such as Dobby has struggled to achieve a truly functional implementation.

IndieGoGo are poor at auditing campaigns to ensure that their claims remain honest and sincere, Gobe would appear to be stretching some truths in their project page.

Within the campaign page, Gobe illustrate three photos which are claimed to have been captured “…directly from Gobe camera”, however each of these photos has a different FOV, particularly the photo of the winding river, which has significantly less linear FOV than the other two shots.

We  suspect that these photos are from cropped clipart unless Gobe can prove otherwise by providing the originals. This coupled with the stated fact that the promotional video does not use footage from Gobe should concern backers.

Gobe Robotics have also chosen to display ‘Testers Reviews’ on their official website, however from the staged promotional video and lack of a clear feature specification, it is unlikely that at this time a drone even exists which could be ‘tested’ by anyone.

Questions and answers with Gobe…

We approached Gobe with some basic questions to assist backers in their initial decision making, their answers are below.

Q: Where are Gobe Robotics based?

Q: Your website states that Gobe is “ready for mass production” and yet not a single demo video exists to showcase and evidence the functionality of your drone.

[perfectpullquote align=”full” cite=”” link=”” color=”” class=”” size=””]”We do mention we are ready for mass production because we have functional prototypes, and we’ve been in China over 3 years, the factory we team up with is one of the best in the drone industry. “[/perfectpullquote]

Q: You have utilised ‘tester references’ from three individuals via your website, suggesting that the drone works fully, including all features being fully functional, are these references genuine from real testers?

Q: Are you aware of the IndieGoGo terms of use for campaigns, including the use of fictional or unevidenced claims?

[perfectpullquote align=”full” cite=”” link=”” color=”” class=”” size=””]”We do are aware about all the terms and conditions, is not the first indiegogo campaign we have, we have always shipped and keep our customers updated with all the manufacturing process”[/perfectpullquote]

Q: Users need to see evidence of the camera capabilities, can you confirm that all imagery shown on your website was captured with a Gobe prototype?

Unfortunately the Gobe campaign strikes similarities with other crowd-fund drone campaigns such as SelFly and Kudrone, both of which committed to deliver drones to their backers in July this year, and are yet to ship a single unit.

We strongly advise that eager backers for drone projects hold on to their funds, avoid pre-order and crowd-fund campaigns and to instead invest in proven and readily available drone products.

Have you invested in Gobe? If so, comment below with your thoughts.

Join the DroningON Discussion Group for the latest news, reviews, exclusives and interviews from the drone industry.