A Guide To CAA UK Drone FAQs, Rules And Regulations 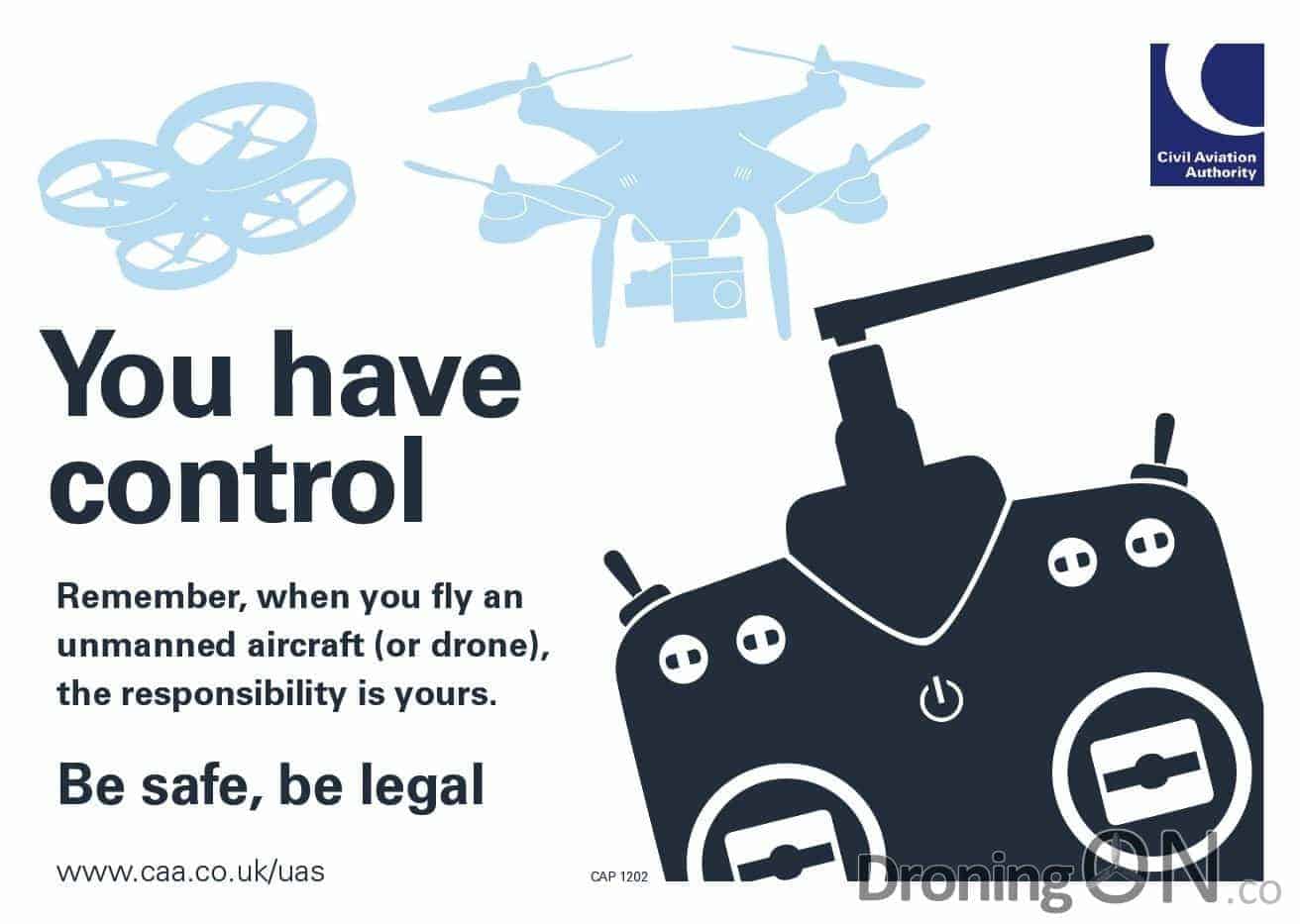 With drones now flooding the consumer market, they are now a common sight within most households. Drone owners must be aware of the rules before taking flight, this article hopes to assist with understanding these regulations.

The rules and regulations concerning drone flight in the UK are still fairly loose, considering the potential risk of an aircraft wandering into commercial airspace. There are however basic guidelines, many of which have been present for many years in order to regulate the traditional fixed-wing RC hobby.

New owners of drones and quadcopters are rarely aware of the guidelines applicable to their use. The rules and regulations can be complex to interpret but they are important in order for hobbiests to continue to enjoy the freedoms that we have today, also to avoid a heavy fine for breaching them.

We have been in dialogue with the CAA, the following FAQs will assist pilots in understanding how to safely fly their drones.

[stextbox id=”info”]We are in direct contact with the CAA department responsible for these regulations – if you have any queries or require clarification, comment at the bottom of the article.[/stextbox]

Where can a recreational (non-paid work) drone be flown?

[perfectpullquote align=”full” cite=”” link=”” color=”” class=”” size=”16″] As a general rule, unless the drone pilot has permission from the CAA, he or she should not be flying within 150m of a ‘congested area’ (e.g. town or city) or at a public event. When the pilot does have permission from the CAA, such flights are usually restricted to flight distances no closer than 50m from persons, vehicles and structures that are not ‘under the control’ of the pilot. Direct over-flight at any height is not usually permitted.
–

These restrictions mean that the use of a drone in public places is limited and often not suitable or legal unless the operator has received the appropriate permission from the CAA. [/perfectpullquote]

What is the CAA definition of a “congested area”?

[perfectpullquote align=”full” cite=”” link=”” color=”” class=”” size=”16″]The definition of a congested area is: ‘Congested area’ in relation to a city, town or settlement, means any area which is substantially used for residential, industrial, commercial or recreational purposes’.[/perfectpullquote]

[perfectpullquote align=”full” cite=”” link=”” color=”” class=”” size=”16″]The Police often have greater resources, response times and powers of investigation than the CAA. To support this, the CAA has now agreed with the Police that they will take the lead in dealing with drone misuse incidents, particularly at public events, that may contravene aviation safety legislation or other relevant criminal legislation. We recommend that any such incidents are reported directly to the Police.
–

Certain types of drone flights, i.e. those that may be endangering an aircraft or are made in the vicinity of an airport or airfield, in addition to being reported to the Police, should also be specifically reported to the CAA using form FCS 1520. The CAA’s remit is limited to safety and does not include concerns over privacy or broadcast rights.[/perfectpullquote]

What is the difference between a ‘drone’ and a ‘model aircraft’?

[perfectpullquote align=”full” cite=”” link=”” color=”” class=”” size=”16″] Before describing the differences, it is important to note that both can be classified as ‘small unmanned aircraft’ and that there are civil aviation regulations covering how and where they can be used. Recent technological advances mean that a much greater variety of small unmanned aircraft are now available. These vary from the ready-to-fly multi-rotor types that represent the popular conception of a ‘drone’, through to the traditional kit or plans-built model aeroplane or helicopter.
–

A typical multi-rotor drone is heavily gyro-stabilised and can use GPS for guidance in addition to acting on Radio Frequency (RF) commands from the pilot. The traditional model aircraft usually uses only an RF signal, requires much greater pilot training and skill, and is flown only at specific recreational sites away from persons and property. In regulatory terms, the only real distinctions made are that small unmanned aircraft used for commercial purposes, or that are fitted with a camera (i.e. equipped to undertake any form of surveillance or data acquisition), have additional requirements or limitations that restrict their use in certain circumstances. [/perfectpullquote]

What is the CAA definition of a ‘Small Unmanned Aircraft (SUA)’?

[perfectpullquote align=”full” cite=”” link=”” color=”” class=”” size=”16″] In terms of these regulations (the Air Navigation Order), a ‘small unmanned aircraft’ means any unmanned aircraft, other than a balloon or a kite, having a mass of not more than 20kg without its fuel, but including any articles or equipment installed in or attached to the aircraft at the commencement of its flight.
–

When an unmanned aircraft weights more than 20kg, additional regulations come into play and recreational aircraft in this category are usually classified as ‘large model aircraft’. [/perfectpullquote]

Are there any specific regulations for drones (small unmanned aircraft)?

If I am flying FPV, how do these rules apply to me?

[perfectpullquote align=”full” cite=”” link=”” color=”” class=”” size=”16″]When flying via FPV, it is essential to have a spotter present whom can maintain visual track of the aircraft. The spotter is classed as an ‘individual under your control’ and consequently is exempt from the 50m rule concerning flying in proximity to other people.[/perfectpullquote]

What is classified as ‘paid work’ and requires a CAA certification?

“Any purpose, other than commercial air transport or public transport, for which an aircraft is flown if valuable consideration is given or promised for the flight or the purpose of the flight.”
–


At the present time, any activities involving the remunerated carriage of persons, cargo or mail are prohibited to drones although occasionally permission may be given to ‘drop articles’. The term ‘aerial work’ allows a broad variety of flight applications, predominantly centring on aerial photography or the operation of other sensors and data-gathering devices. The essential question that needs to be asked is “what is the purpose of the (specific) flight?” i.e.”If I were not receiving payment/valuable consideration for making the flight, would it still take place?”
–

Example 1: A drone operator holding a CAA permission for aerial work is engaged to film or survey a building development site or infrastructure facility. This is clearly within the remit of the permission and the operation can proceed within the limitations and conditions stated on the operator’s permission.
–

Example 2: An estate agent or builder’s firm wants to use a drone for aerial imagery/survey as part of their service. This also would be considered aerial work even if it only comprised a small part of the service to the customer, e.g. advertising a customer’s house or checking the property for the extent of works required. The operator of the drone would need to have a CAA permission for aerial work. The estate agent or builder’s firm should gain a permission or use the services of an existing permission holder (a list of such permission holders is provided on the CAA website (last link at the bottom [/perfectpullquote]

If I upload my drone footage to YouTube or my own website which features advertising/monetization, is this classed as commercial-use?

[perfectpullquote align=”full” cite=”” link=”” color=”” class=”” size=”16″] No, not if advertising revenue received as a result of persons visiting a website or social media page where video or photographic stills shot from a drone are displayed/posted. This is because these types of web-pages may be legitimately used to post recreational video material that was not commissioned by another party, but was conceived and wholly funded by the poster. This would not apply if the photographic material had been directly commissioned by another party for the purposes of display or marketing on their website.
–

Also, an individual or business would not usually be considered to be doing ‘paid’ aerial work if the flight is provided only for their own use. However, imagery generated in this way should not be sold to another party. [/perfectpullquote]

I live near an airport/aerodrome, am I allowed to fly?

[perfectpullquote align=”full” cite=”” link=”” color=”” class=”” size=”16″] In practical terms, drones of any weight could present a particular hazard when operating near an aerodrome or other landing site due to the presence of manned aircraft.
–

Operators of small drones are therefore strongly advised to remain clear of charted aerodromes by at least a distance of 5km, whether or not the aerodrome is in controlled airspace or has an associated Aerodrome Traffic Zone (ATZ). [/perfectpullquote]

Are drone flights indoors exempt from all CAA regulations?

[perfectpullquote align=”full” cite=”” link=”” color=”” class=”” size=”16″] The Air Navigation Order makes no distinction between flights made indoors or in the open; the drone safety criteria continue to apply. Notwithstanding this, certain hazard factors are heavily mitigated in that the aircraft is flying in an enclosed environment and access to the venue can be controlled. Persons within the building, and who may be exposed to a hazard by the flight, should meet the criteria for ‘persons under the control of the person in charge of the aircraft’ or else have safety precautions taken on their account (e.g. safety netting, tethered drone, etc).
–

Minor indoor recreational use of a very small and light ‘toy’ drone is not generally regarded as having the same safety implications as for larger drones used outdoors or in commercial service. [/perfectpullquote]

Read more about the UK drone law, guidance, rules and regulations via the CAA website, click here for more information.

Note: Whilst these regulations are UK-specific, the guidelines are well constructed and could be utilised in countries where no such regulations currently exist. Always check your local country guidelines before taking flight.