Did A DJI Mavic Pro Film A Landing Chinese Airliner – Real or Hoax?

The Chinese news and media have been reporting on the alleged filming of a passenger airliner on final approach, footage captured by a hovering drone only a few hundred meters away from it. But just how convinced are we that this footage is real and not a hoax.

Before we start with the analysis watch the below clip for yourself, be prepared to rewind it several times.

The above video clip was uploaded to the Chinese social media site ‘Weibo’ by a 23yr male named Yuan Mou. After members of the site contacted the local authorities with concerns, Mou was tracked down and arrested by Police whom traced him using the reference number that he had embedded into the closing scene of the video.

According to the single report released so far on the 16th January by the ‘Public Security Bureau of Zhejiang Province’, Mou flew the drone at approximately 8.5km from the Hangzhou City Airport at around sunset on the 15th January 2017.

He flew to around 450m altitude and captured a number of aerial images, including video which is said to have featured a number of passing airliners. In total, Mou captured around ten minutes worth of footage, despite the uploaded clip only lasting nine seconds.

The global press have quickly caught on to the story and have been rewriting it with absolutely certainty that the crime was committed, with a drone, and yet many observers of the footage believe it to be a scene from either a flight simulator or a 3D rendered clip, all part of an elaborate hoax.

The Chinese Police conclude their statement to say that the investigation is ongoing, no additional information has been released since.

The clip features a recognisable ‘DJI Mavic Pro’ ending sequence and some have stated that this provides definitive proof that the clip is authentic and from a drone. But users of the DJI products know that the DJI-Go Video Editor can append such titles onto any movie clip, including those not shot with a DJI product, or third party video editing software could be used. 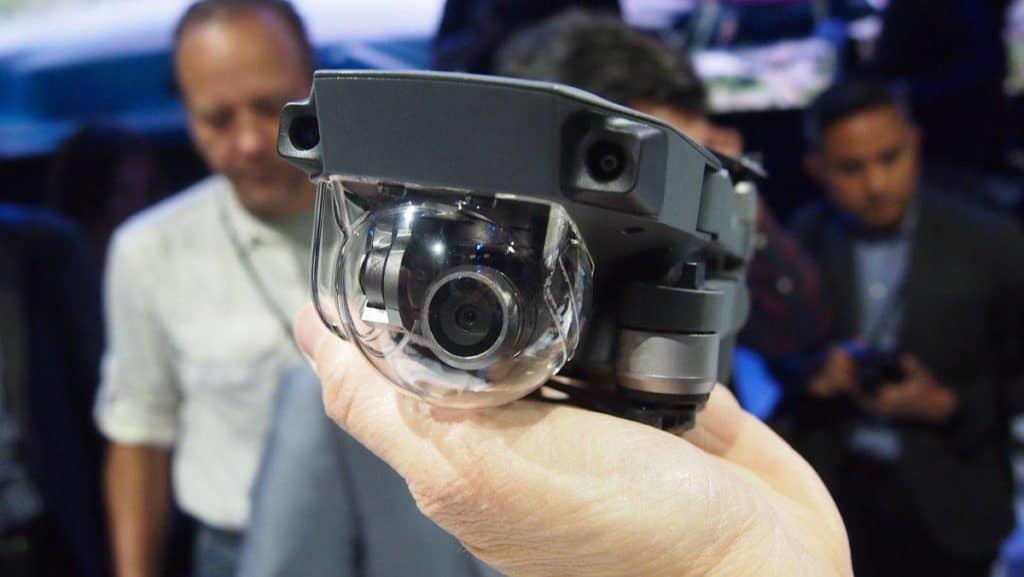 Despite this, news publications such as the IBTimes confidently state that this sequence “clearly shows it came from a DJI Mavic Pro drone“, which is simply not the case.

CNN report that Shenzhen-based DJI have expressed a “strong condemnation” of the illegal filming, but they have not confirmed nor verified that one of their products was involved. At this time, there does not appear to be any clear evidence to verify that the footage came from a DJI Mavic Pro, or a drone.

The scenery, fog, buildings and flatness of the terrain look distinctly like modern flight simulator rendering. In addition, the plane lacks shadows, shadings and remains bright and vibrant as it approaches and passes the camera, despite the overcast looking weather.

As the camera pans from left to right, the background does not appear to suffer from any form of motion blur which might be expected if the footage were genuine.

The Airbus A320, whilst on final approach, can be travelling at approximately 130kt-160kt and yet it too is perfectly sharp and in focus. Since the launch of the DJI Mavic Pro, many users have been confused by the ‘Tap Focus’ feature of the Mavic Pro, this user must have been an expert to keep the plane in focus despite it approaching and passing at speed.

As the plane passes the camera, there is no visible wing-flex nor heat-distortion of the scenery behind, although the engines would be running at low power which would reduce the distortion effect.

The resolution of the clip is very low, the highest quality version that we could locate was only 400px x 224px @ 29fps. The Mavic Pro is 4K capable and yet the author has severely limited the output resolution for this movie.

If the clip is a 3D rendering, reducing the video resolution by this degree would improve the look of authenticity for the clip, producing a ‘real’ look rather than an artificially rendered appearance.

It is well known that Chinese internet bandwidth limitations mean that users are forced to degrade the quality of video clips, therefore if this clip is genuinely from a Mavic Pro, this might be the reason for the low quality of it.

Last year, DJI enhanced their app by introducing geo-fencing. This functionality prevents users from flying in protected airspace unless they have first registered and requested exemption.

It is not known whether the user had such exemption or had found a way to circumvent the geo-fencing technology. DJI state on their geo-fencing website that an area of 8km surrounding an airport is generally marked as non-flyable.

The user is stated to have flown 8.5km away from the airport and so if this genuinely was a drone, such a flight would have been possible.

DroningON and the drone community do not want this video to be real because it does indeed highlight the dangers of irresponsible pilots flying their aircraft in protected airspace. If this clip is genuine then we and the community absolutely condemn the actions of the pilot.

According to the Police report, a Mavic Pro drone was located at Mou’s property and it is stated that he has accepted the charges, but the global press unfortunately only know what the Chinese Police have so far communicated.

It is likely that the Chinese Police and authorities would be deeply embarrassed at falling for such a hoax if discovering that the footage was not legitimate. We could not predict their subsequent action in such circumstances but in a country where communication is highly governed and policed, it is unlikely that we would hear from the Mou again.

In order for the drone community to believe the authenticity of this video, we would want to see at least one of the following:

We will monitor the Chinese news and update this article when additional information is available. For the time being, DroningON are highly suspicious of this footage and the report from the Chinese Police.

If you know the pilot or the author of the video, please contact us.

And finally, comment below to let us know your thoughts, is this footage real or fake? Share this article as we would like a wide consensus.