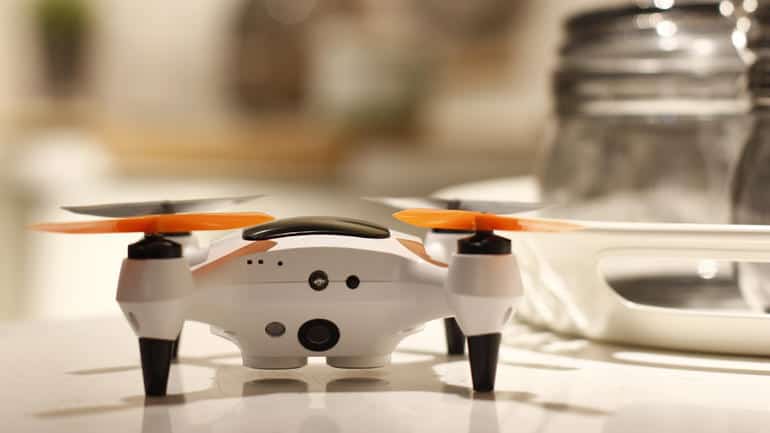 Part 2 of our exclusive interview with the R&D Management team of the China based IndieGoGo Crowd-Funder ‘OnagoFly’.

This section of the interview will focus on questions around the drone functionality, the Android and iPhone apps and include discussion around some of the suggestions made by us and backers.

D-On: Welcome back Dr Wei and thank you again for your time yesterday, the OnagoFly backers have found the information so far incredibly useful.

Dr Wei: My pleasure, thank you for your hard work yesterday in being able to interview and publish so efficiently! And do call me just ‘Wei’ instead of ‘Dr Wei’ (laughs).

D-On: Lets start with one big area of confusion for the USA backers whom were the first to receive the OnagoFly ‘first-generation’ batch. The OnagoFly app defaults to ‘Tilt/G-Sensor’ mode which I suspect is the cause of most failed first flights, crashes and broken props.

Wei: Very good point, the users can change the mode (G-Sensor vs Joystick mode) just by pressing the toggle button before launching (2nd button from left). We performed many experiments and tests in different environments and we found that when users use joystick mode, it’s harder to control the altitude and so it made sense to default it to that mode.

D-On: Could you consider adding a ‘Settings’ option so that the pilot can choose the default flight mode when first starting the app?

Wei: Yes of course, we’ll have a think about this again.

D-On: The primary attraction to backers for OnagoFly is the ‘Follow Me’ functionality, so how do you use this mode?

Wei: Firstly, I’ll explain a little more about the ‘Follow Me’ functions. We track the GPS position in your mobile phone as well as separately onboard within OnagoFly via it’s own GPS receiver, we then compare the difference in location to determine positioning of both and based on that our algorithm calculates where the OnagoFly needs to fly.

It should be noted that whilst we are confident about the quality of the GPS receiver within OnagoFly, we cannot guarantee that all Smart Devices will be as accurate. Because of that we have an accuracy threshold whereby the OnagoFly will monitor whether ‘Follow Me’ is still possible.

D-On: What happens if GPS signal is lost on either the Smart Device or OnagoFly when using the ‘Follow Me’ mode? Are the two scenarios handled in different ways?

Wei: If the Smart Device loses GPS, then the OnagoFly will return to fixed GPS hover mode and will stay hovered in it’s last position. If the OnagoFly loses its GPS signal then this will be indicated in the App as the GPS icon will turn grey, OnagoFly will then automatically switch back to ‘Manual’ mode whereby the user must pilot it.

D-On: So is there an audio warning if OnagoFly loses it’s GPS signal because clearly the pilot would then need to manually pilot it immediately for a safe landing?

Wei: I will verify this with the rest of my team and take your suggestion for adding a warning/alert sound if this does not already exist.

D-On: Users has complained that they’re not sure how to tell when their OnagoFly has a GPS lock, how does the user tell and could you provide output of locked satellites as per the DJI app?

Wei: We do provide a colour coding of the GPS icon to indicate whether or not GPS signal is sufficient and accurate. If the icon is grey then it means that the GPS status is not satisfactory for ‘fixed hover’ or the ‘follow me’ mode, consequently you can only control manually. If the icon is orange then the GPS has acquired sufficient satellites and safe flight is possible.

D-On: So why use grey and orange instead of red and green as the latter would be far more logical/intuitive?

Wei: …but OnagoFly’s brand colours are grey and orange (laughs), but seriously we will consider that suggestion to make the colours more logical.

D-On: Once the user has an orange GPS signal, what should they do next?

Wei: Firstly they should disable the ‘Tilt/G-Sensor’ mode before launching because GPS autonomy does not work whilst the drone is moving according to the tilt of the phone. The user can then press and hold the ‘Lock’ button for 2 seconds (approximately) which will start the motors spinning gently.

They can then use either auto-take-off or manual take-off using the throttle to make the OnagoFly ascend to the altitude that they want it to hover at. They can then release the controls.

The OnagoFly will then use its inbuilt barometer sensor to maintain its altitude, it will hold it’s position in the air by using the GPS sensor. The position hold accuracy in the air should be approximately within a 1m circle, however wind and other environment elements can of course affect this.

D-On: How confident are you now of the GPS functionality of OnagoFly based on the problems experienced by first-generation owners?

Wei: We have recently reduced the GPS signal interference andtested many times. Assuming that the GPS status is orange and that the OnagoFly is at a reasonable height in the air, and that it is not windy then the drone will keep it’s position.

But, the OnagoFly is very light and small and so it is hard for it to be perfectly accurate but we are really pleased with the results so far and are still working to improve it further still by improving the accuracy of the GPS.

D-On: So once it’s up in the air and holding it’s position, we are then safe to press the ‘Follow Me’ button, what happens next?

Wei: Correct, the basic function of this mode is that if you’re moving or running with your Smart Device, your position will change and this position is transmitted in real-time to the OnagoFly via Wifi. The drone is therefore aware of your direction of travel and so will make a decision to follow you, keeping a preset distance away from you.

D-On: With the OnagoFly in ‘Follow Me’ mode, have you completed any speed testing so as to understand its maximum speed when following a vehicle for example?

Wei: We have tested with a person running and after this interview I can share with you a brand new video clip that I recorded myself (clip enroute), but we have not tested with following a vehicle at this time but we will take that suggestion and perhaps do some testing.

DroningOn Note: We do not recommend using ‘Follow Me’ mode on a drone of this scale with vehicles due to safety.

D-On: It was confirmed recently that the ‘Follow Me’ mode will have a changeable altitude and distance, can you give a little more information about how this will be implemented. In addition backers have also asked for the two elements to be separate so that the user can choose the altitude and distance separately to cater for different scenarios.

Wei: At this stage you cannot change the distance but in the latest version of the app you will be able to change the altitude/height, we built a computation in the new firmware to allow this value to be changed between 3m – 8m.

D-On: So why the lower and upper limits of 3m and 8m? Users need flexibility and so a height limit of at least 20m would be preferable, especially if the user wishes to fly in areas where there may be trees which OnagoFly might collide with.

Wei: We have been testing and have found that if the OnagoFly flies over 8m height then the image/detail of the user is very small, but we taken onboard your comments and we will consider them to increase these limits.

D-On: So what happens if the OnagoFly ‘Low Battery’ warning triggers whilst being operated in ‘Follow Me’ mode?

Wei: A warning will be shown on the screen of the user’s Smart Device, if they ignore the warning then the OnagoFly will autonomously auto-land. This is important because if the battery dies whilst the drone is flying then it will drop to the ground damaging the unit and potentially injurying people and damaging property.

D-On: Is there any indication when flying OnagoFly that the battery level may be low?

Wei: Yes, within the app, we display the battery percentage and so that the pilot should always be aware of the battery state.

D-On: And is the percentage based on the voltage of the battery or does this reading always start at 100% at the beginning of each flight.

Wei: We always read the battery voltage live to determine the remaining percentage so that the reading is as accurate as it can be. The fully charged status of each cell in the battery is 4.2v, we monitor these voltages and set the percentage accordingly.

D-On: Which percentage levels do the low-battery warning and autonomous auto-land trigger?

Wei: The initial low-battery warning is triggered at 25% battery level, if the user ignores these warnings and continues flying then the OnagoFly willauto-land at 10%.

D-On: What happens if Wifi is lost between the Smart Device and OnagoFly during control/flight resulting in the pilot losing control input?

Wei: If the Wifi link between the two devices is lost then the OnagoFly will autonomously land immediately in its current position.

We have also tested another scenario where if the Wifi becomes weak, for example because the pilot flies the OnagoFly 100m away in height or distance, and so have built a signal strength threshold monitor. If the Wifi signal drops below this threshold then we will temporarily automatically turn off the live video stream, this reduces Wifi bandwidth utilisation and therefore allows more signal bandwidth to allow the pilot to keep control of the OnagoFly.

However, based on the above, we recommend that the pilot always flies line of sight (LOS) so that in such a situation, they can safely control the OnagoFly.

D-On: We’ve covered ‘Follow Me’ and batteries fairly comprehensively, so now onto some more generic questions.

What is the USB port for on the OnagoFly?

Wei: “Ahhh you ask some good questions, at this time the USB port is only for debugging and software repair by OnagoFly engineers, however we will be releasing new firmware soon for customers to be able to update their OnagoFly. We designed two internal PCB circuit boards in total, one is for flight control and the other is for video processing and encoding. Therefore there will be two different firmware packages.

We hope to start releasing firmware updates in April, this updated firmware will apply to the first-generation and updated v1.0 OnagoFly units.”

D-On: Is it possible to connect a 2.4ghz regular Radio Control transmitter to OnagoFly so that it can be flown without using a Smart Device?

Wei: “Actually we used a regular transmitter ourselves during the development stages, our engineers prefer it (laughs) but we wanted to make the OnagoFly easy to fly and for users to be able to use their mobile phones, so in the current product only a Smart Device can be used, but we are seriously considering allowing transmitter connectivity for future generations.”

Be sure to join the DroningOn Facebook Group for the latest updates, news and reviews of OnagoFly Quadcopter/Drone.